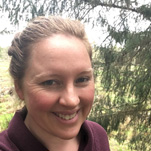 Renia has worked in education in many places, in languages she understands and some she can’t even begin to grasp, and with amazing people, from babies to elders and all those between. She’s been a butler, a baker, an artist, and many other things besides. She’s worked on farms around the world: pressing olives, milking donkeys, making cheese, endlessly weeding… These days she is at home with her and fellow AHS grad, Andrew Fick’s, two daughters, enjoying a new chapter in her learning/education experience.

Terenia believes access to quality education is an essential element of a healthy democracy. In 2001, when she was seeking the next step in her own education, she felt lucky enough to have the support of AHSSI. She was certainly grateful then, but over the years feels she has gained a deeper appreciation of all the intangibles that are included in that kind of support. It is simultaneously grounding and liberating to know that your community believes so deeply in your ability to grow. She is delighted and honored to be part of that culture and tradition.