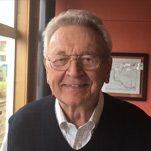 Jerry Gustafson is a native Astorian who attended Robert Gray Elementary School and graduated from Astoria High School in 1952. His wife, Marilyn, attended Lewis & Clark and also graduated from AHS. They were married in 1955 in the Presbyterian Church in Astoria which was built by his great-grandfather.

After high school, Jerry attended Stanford University where he played football (as the quarterback) and basketball. He graduated in 1956 with his Bachelor’s Degree in Liberal Arts. Although he was drafted in 1956 by the San Francisco 49ers and traded to the Pittsburgh Steelers, he opted to play in the Canadian Professional Football League for the British Columbia Lions. From 1957-1959 he served in the army as a US Army Language Instructor based in Puerto Rico.

After his service in the army, he returned to Oregon to start a 44-year career in the Forest Products Industry. With gratitude for his own life of service in his community and success in his professional endeavors, Jerry appreciates Astoria High School Scholarships, Inc. providing students the opportunity to pursue their dreams and to progress forward in their lives in becoming contributing members to their communities.