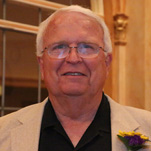 Rick Williams, a class of 1961 Astoria High School alumnus, has been on the Board of Astoria High School Scholarships, Inc. since 2014. He received a Bachelor’s Degree from the University of Oregon in 1965 majoring in History and worked in the lumber business for 40 years, most of it with Georgia-Pacific.

Rick is now retired but keeps busy with volunteer basketball, urban tour groups, OMSI, SMART, coaching basketball, and serving on the University of Oregon Alumni Association National Board. In 2003, he was awarded the Jeanne Johnson Alumni Service Award for his dedicated and extensive volunteering.

Rick was awarded the Ed and Edna Ross Scholarship in 1961, which made it possible for him to attend college. He believes that AHSSI is the finest scholarship program in the state. He is proud to have graduated from AHS and to be part of the Board that awards scholarships to seniors.